Several neurodegenerative disorders are characterized by an age-related build-up of toxic proteins in the brain, which bind to neuronal receptors and disrupt key cellular processes.

Alzheimer’s disease in particular is caused by the age-related buildup of proteins including beta amyloid (Aβ). Under normal conditions, the cell removes these proteins from the brain before they are allowed to accumulate and aggregate into more toxic forms. However, in Alzheimer’s disease, the cellular damage response is disrupted, allowing the formation of toxic Aβ oligomers. These oligomeric forms of the Aβ protein bind to synapses where they cause a cascade of damage and eventual loss of neurons.

In Alzheimer’s disease, the preponderance of evidence suggests that Aβ oligomers are toxic when bound to neuronal synapses. The damage they inflict causes a cascade of damage and eventual loss of synapses. Synapses are the communication points between neurons, facilitating signal transmission throughout the brain. Loss of these structures is directly correlated with cognitive decline in Alzheimer’s disease.

Previous therapeutic approaches have attempted to a) reduce the production of Aβ by inhibiting the enzymes that generate Aβ: γ-secretase or β-secretase; or b) removing Aβ using targeted monoclonal antibodies. None of these compounds selectively targeted Aβ oligomers and to date they have demonstrated limited effect.

Cognition’s approach is unique in that its candidate, CT1812, is designed to restore damaged cellular processes such as autophagy, cholesterol synthesis and protein trafficking, which are dysregulated in neurodegenerative disorders. CT1812 binds to TMEM97, a protein component of the σ-2 receptor, a key regulator of the cellular damage response. In Alzheimer’s disease, this results in the displacement of Aβ oligomers, which are then cleared into the CSF.
Preclinical studies have shown that by displacing Aβ oligomers and preventing further oligomer binding, the brain’s damage control mechanisms can be re-enabled. So long as the neurons remain viable, synaptic density and function can recover. This creates the opportunity to treat ongoing cognitive deficits in Alzheimer’s disease and prevent further deficits from occurring. 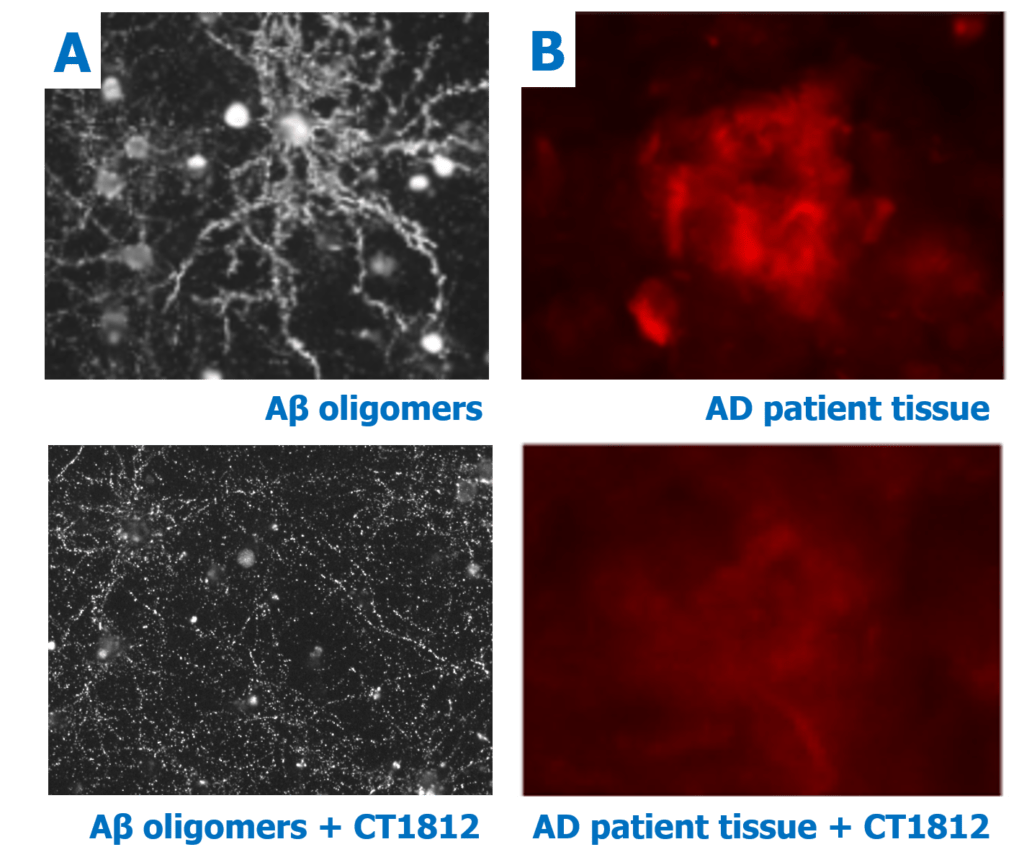 CT1812 has completed three Phase 1 trials and enrollment has concluded in two Phase 2 clinical trials with two additional physiology trials ongoing in patients with Alzheimer’s disease. Cognition has been awarded a $75.8M grant from the NIA to study CT1812 in a study of 540 Alzheimer’s disease patients. This study will be conducted collaboration with the distinguished Alzheimer’s Clinical Trial Consortium (ACTC) and is expected to commence in 2021.